Jobs, the foundation, where we earn our daily living to pay bills, buy things and build our career could be threatened by robots and AIs. Jobs can be threatened because of economic downfall. One thing that can threaten jobs is the constant progress in technology. Several articles on the internet list jobs that could be replaced, impacted or transformed by robots, Artificial Intelligence and technology. Will robots arrive to knock at your door and drop off their resumes?

Will AI replace some of the jobs? 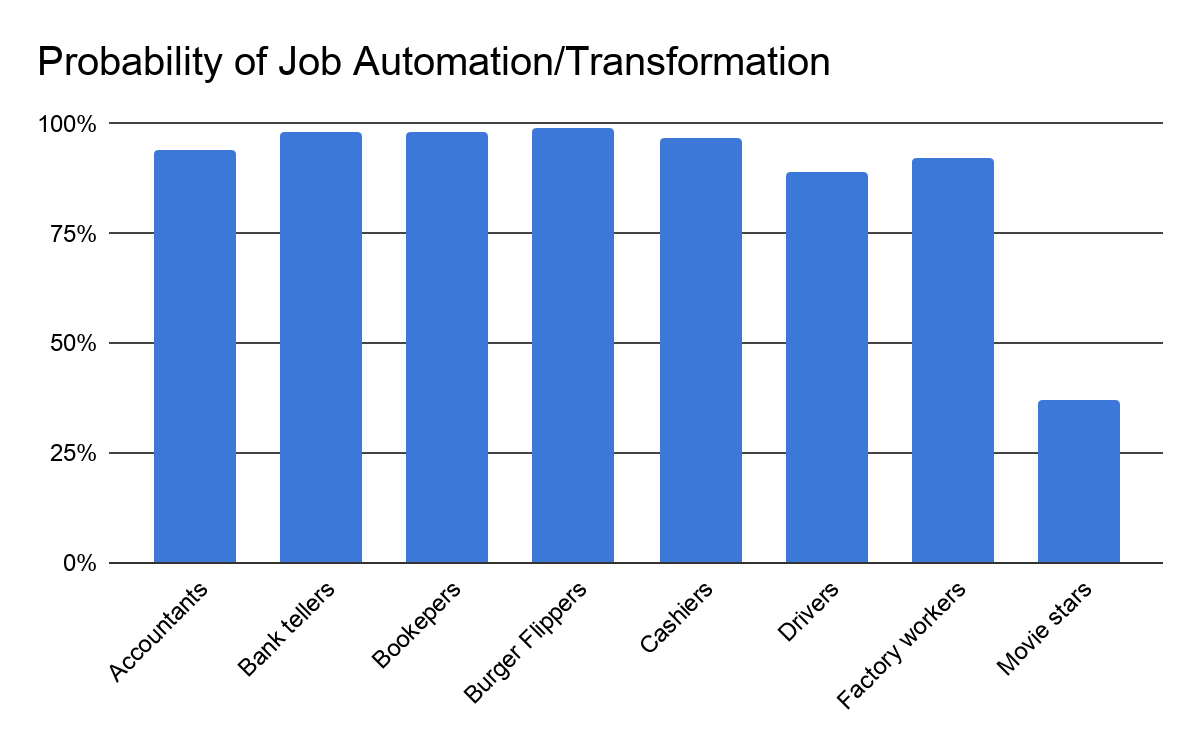 The jobs below have been mentioned across the internet as those with higher chances of automation. Such automation could happen in countries with higher technological advancement but not any time soon in countries with low AI and technology penetration. There is conflicting info cited in some internet articles whether these jobs can be replaced or not by the machines.

It’s hard to predict the future but AI and technology could replace jobs that are simple or repeatable that don’t need human oversight and creativity.  Jobs that are repetitive, easy and don't need human interaction could be replaced by robots. Some jobs can be impacted by AI but they can’t be replaced by robots. Rather, they will be transformed, which means it can result to new jobs.

Burger flippers are those people who work in shops and restaurants. They take frozen burger patties or sausages, grease the grill, and flip the meat to make sure they aren't’ burnt on each side. The pros of this job - it’s easy to do. The cons - it’s low paid and you’ll end up greased and sweated after day’s work.

Caliburger, a California burger chain, used flippy - costs $60,000 -  $100,000 robot that can flip numerous burgers in a minute. Using a computer, the human programs the robot according to the seconds (80s, 71s). Jerrson Graham from USA today commented that the burger tastes like human flipped burgers, although it’s a little bit salty.  If the inventors perfect the robot, it could replace human flippers but this would not happen anytime soon as the machine is too expensive and not every business can afford it.

Tech advances in computers, software and artificial intelligence lead to partial automation in some places. One example is the cashier-less store of Amazon Go that uses hundreds of sensors and cameras on every shelf. Customers will tap their smartphone on the gate, enter the store, and pick up goods from the shelves. The shoppers will use RFID tags in each good to check out. On the other hand, in countries where there is less AI and technology penetration, automating cashier jobs is unlikely in the near future.

Different opinions say about the plight of accountants and bookkeepers in the near future. An article from Hubspot lists bookkeepers as among the jobs where robots can take over. Likewise, vanna.com cited accountants as one of those replaceable by AI. On the other hand, finance.toolbox.com reports that AI will not replace accountants but instead transform into other jobs for humans because still, humans are the ultimate decision and oversight maker.

While we aren’t sure about the future, we can see in the trend that software such as Enterprise Resource Planning programs, Quickbooks, Freshbooks can pull transactions from credit and bank accounts. ERP programs can already automate 50% of accounting tasks such as double entry. Online software such as Hubdoc and Shoeboxed can scan documents, convert them into digital format and records. Will AI take jobs from Accountants and Bookkeepers? They could be transformed into a foreseeable future and perhaps have their tasks replaced by software. These two jobs can assume another role - data managers and advisors who make decisions and oversight.

Bank tellers are in the hot list of jobs replaceable by robots. There’s already an ATM capable of receiving cash deposits - although it’s only among the jobs of bank tellers. Some articles reported a bank staffed by robots. One example is the China Construction Bank that used assorted ATMs and machines that offer foreign exchange, account opening, deposits and wealth management.

Another is an article about the prediction from Wells Fargo (A US Bank and Financial Service company) which cited that robots could snatch 200,000 jobs from humans in the next 10 years. Based on these articles, those banking jobs with menial and repetitive jobs could be replaced or at least affected by technology. Again, it’s hard to predict whether androids would come knocking before a bank employee’s doorstep. Like accountants, such technology affecting bank teller jobs could take decades or more in countries or places with low technology penetration.

A self-driving car is able to self-drive without a human behind its steering wheel. Google has already started its autonomous car in US roads and another in the UK. Alphabet Inc. (Google’s parent company) owns Waymo, a subsidiary, responsible for developing self-driving technology.

You can notice a self-driving car through the variety of sensors embedded inside and outside. Google uses sensors to navigate roads, identify and avoid obstacles. The sensors include LiDAR (Light Detection and Ranging), gyroscope, GPS, altimeter, tachometer, ultrasonic sensor and radar. However, this self-driving technology is far from perfect as it has only limitations such as the inability to pothole detection, detours, rerouted roads, inclement weather, unmapped stoplights, and human or police officer signals.

Now, back to the issue if tech could replace drivers. The answer is that it won’t replace drivers anytime soon in the near future. Even if somehow programmers and developers overcome obstacles, the computer controlling the car has to deal with making the best decision out of multiple bad choices.

Star Wars, one of the most iconic and cultural movies, used a CGI (Computer Generated Imagery) to replace the late Carrie Fisher. The digital Princess Leia looked similar to the actress as the movie used another CGI to superimpose the computer-generated face over other actresses' faces before Fisher passed away. Fisher’s family already approved a CGI Princess Leia for another Star Wars movie. For movies completely made with 3D animation, it’s already happening when full digital characters act and talk like humans.

On the other hand, there’s an argument that AI/robots won't replace movie stars because of “emotion”. Robots have no emotions and such human quality is always found in scenes.

Possible scenarios that could happen in the near future include:

Factory workers include packers, machinists, welders, CNC (Computer Numerical Control) machine operators, quality inspectors, and safety specialists. They work in factories of metal sheets, cars, car parts, appliances and plastics.  According to a BBC report, robots could replace up to 20 million factory jobs by 2030. Oxford Economics (a quantitative analysis and global forecasting firm)  said that jobs that are repetitive, menial or low skilled are at risk of being replaced by automation. On the other hand, jobs that need creativity, compassion, and social intelligence won’t be replaced by robots.

Will Robots and AI ultimately take away jobs from Humans?

It’s hard to come up with an accurate conclusion as some of the estimates or predictions may or might be exaggerated. We can conclude that:

What to do when faced with technological advances?