Some jobs are already extinct due to advances in technology. One of the examples of jobs axed were in the telecommunications industry. Such jobs gradually disappeared as new smartphones entered the market. Here are the extinct jobs from the medieval period to recent history.

The 1980s and 1990s decade was the era of a golden age for telecommunications companies that employ telephone booth clerks. The job of clerks was to guide and connect customers to their friends or loved ones. They may also process the payments of customers using the telephone booth. When the smartphones came into the market and became more affordable for the public, telephone booths slowly faded as well as the telecom companies that were too slow or unable to innovate or upgrade their products and services.

Don’t be misled by the term “farmer” in this occupation, gong farmers didn't harvest crops but instead …. A crap - fecal matter. So there goes, during the medieval period in the European countries, relieving oneself involves a privy consisting of a raised board and a collector underneath. The feces were collected into the cesspits. Over time, these cesspits overflowed with feces and needed to be empty. This is where gong farmers do their job - empty and collect their stinking harvest.

Gong farmers carried carts or wheelbarrows to collect heaps or piles of poop and dump them into the community pit. Because of the unholy smell emanating from the human excrement, gong farmers only worked at night to avoid disturbing people from being horrified by the obnoxious gases. That’s when the term “Night farmer” came into being. The word “Gong” came from the word “going” from the phrase going to the bathroom.

The invention of latrines, septic tanks and sewage collection services had made this job extinct. 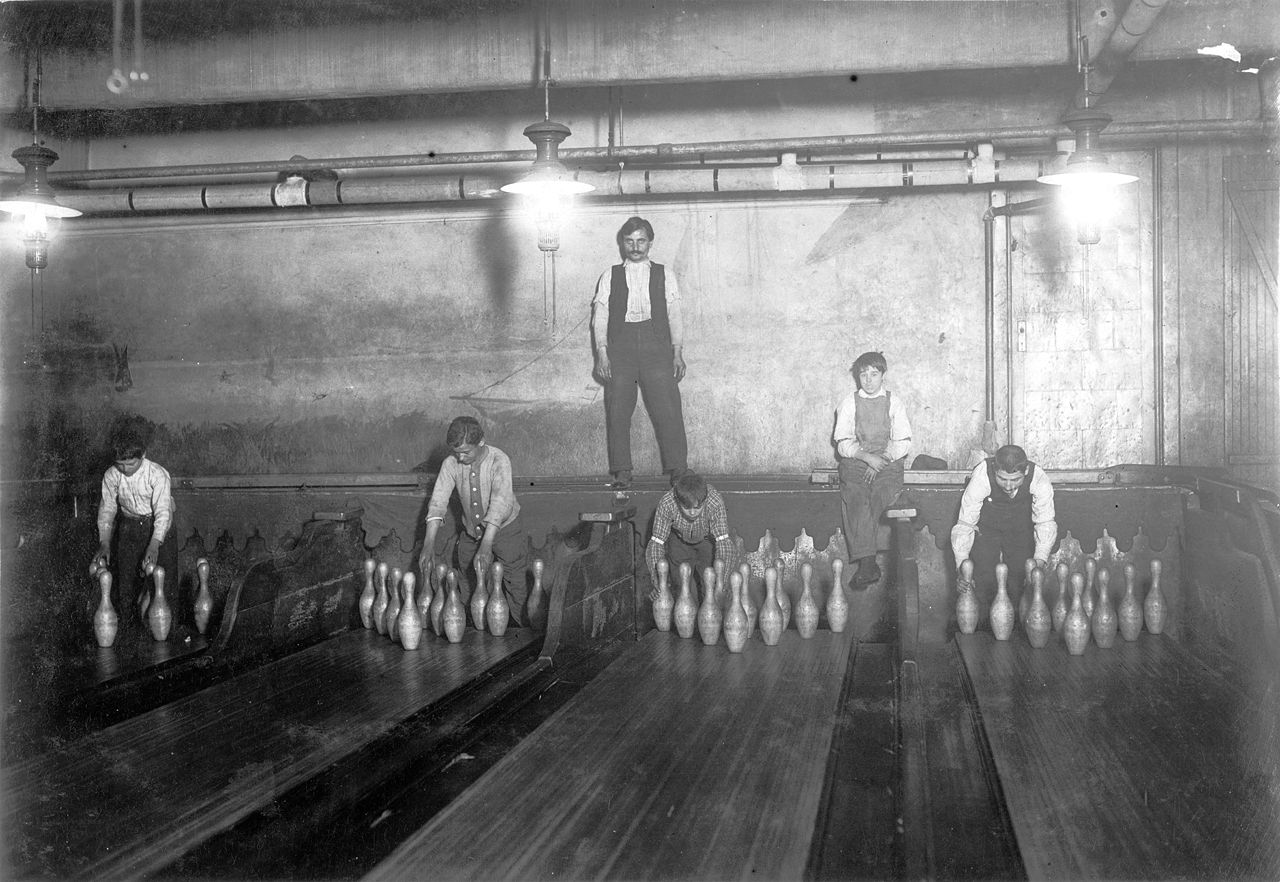 Photo by Library of Congress and licensed under Creative Commons

If you have been to bowling alleys during the 1990s and early 2000s, most bowling centres employ bowling pinsetters. These workers’ job was to collect pins and lay them upright for players to hit. The downside of this job is that you have to avoid being hit by the plastic or fibreglass ball and end up with the injured foot. Pinsetter machines replaced this job in most or all bowling alleys.

Back to the 1980s and 1990s, when people sent letters to telecom companies. A telegram is a short-medium message with a corresponding price for the number of words. A messenger task was to carry a bunch of envelopes containing messages delivered by a cargo. The invention of smartphones and SMS have made this job obsolete.

During the industrial revolution in Ireland and Britain, a paid human alarm clock or knocker-up woke up their clients using sticks to knock onto the doors and windows. This job went extinct with the invention of mechanical and digital alarm clocks.

Morse code constitutes dots, dashes, and spaces that correspond to letters, punctuation and numbers. Such dots and dashes are represented by long and short sounds. Back to the 19th century and early 20th century, most telecom companies used Morse code for communication. The invention of smartphones, cell sites and other radio communication devices made the commercial use of morse code obsolete. Now, this job is confined to some of the aviation and naval industries.

Way back to the 1990s when pagers were regarded as a mobile form of texting just like today’s mobile phones, pager operators stand between the sender who calls via phone and the receiver who owns a pager. The job involved transcribing the verbal message of the messenger and sending that message into the pager of the receiving person. A pager is a small and pocket-size device with LCD backlit display that shows monochrome characters of numbers and letters.

If you’re the 1980s or 1990s kid, you may remember those shops housing shelves or libraries of VHS and Betamax tapes. Betamax was developed by Sony to record sounds and videos. VHS or video home system is another recording medium released by Japan Vector Company. The video store attendant’s job was to process requests of customers, help them find the best movies, inform them about the latest release and process payments. Soon after early 2000s CDs and blu-ray disks came and replaced VHS and Betamax tapes which became museum pieces.  The obsolescence of Betamax and VHS tape ended the careers of video store attendants.

In the early 19th century and 20th century, gas streetlights illuminated cities, homes and streets. Someone had to light these lampposts and extinguish them by the next morning. Thousands of these lampposts were installed in major cities and thus required numerous lamppost lighters. Lamppost lighters used to carry ladders and matches to remove the lamp cover and light a candle or some sort of gas soaked wick. Soon after, the introduction of incandescent light bulbs and fluorescent lamps made this job extinct.